I had to learn that the only outcome I could ever control is my own reaction to what’s happening now. – Daniela Botterbusch I never wanted a husband. I wanted children. Being the daughter of parents who succeeded at love, in all its flawed and beautiful ways, I knew I could accept nothing less than …

I had to learn that the only outcome I could ever control is my own reaction to what’s happening now.

I never wanted a husband. I wanted children.

Being the daughter of parents who succeeded at love, in all its flawed and beautiful ways, I knew I could accept nothing less than the real thing. I also knew that finding such love was rare and that I would be fine if it never happened. My parents loved me fiercely. I didn’t need to receive more love; I wanted to give it.

Always a practical and solution-minded person, I had a plan B for life. Should it happen that I was not living “on the rails” (as I liked to think of it) by a certain age, I would move back home and have a baby on my own. After all, I had my family to help raise the child.

And so, though I had a successful career and was happily living in New York City, when I reached my mid-thirties and hadn’t yet met the right guy, I started to execute my “plan B”. I quit my job, moved home to Atlanta, bought a condo, and started my own version of nesting.

Only a few months later,  on an unseasonably warm night, I met my husband-to-be at a rooftop party while back visiting friends in New York. After hours of talking and laughing I managed to lay out my entire life plan to him. When I was done, he said with a smile, “that’s the most ridiculous thing I’ve ever heard.” And then we both started laughing – because we already knew, on some level, that all those plans were going to change.

Of all the things I planned for that never came to pass, having problems getting pregnant was not one of them. I never had issues; I was built to have babies and my cycle was as regular as clockwork — all things I thought were indicators of my fertility.

When I didn’t get pregnant initially, I wasn’t particularly concerned. I went to see my doctor and, at her suggestion, started preliminary blood tests to make sure everything was fine. Everything was fine. In fact, all my numbers were perfect. This remained the theme for the next five years; everything was always fine. Our official diagnosis was, and remains, “unexplained.”

In the land of unexplained, we counted days, measured temperatures, took vacations to “just relax” and then graduated to IUI’s (six in total) and finally, four IVF’s.

We did all of this while living our lives, getting married, maintaining serious and challenging careers, and caring for my parents, both of whom were diagnosed with cancer during this same period.

My dad survived his cancer. My mom did not.

My mom and I often joked that my first-born would be hers and that I’d take the second. When I daydreamed of having a baby, the scene I envisioned was always the same: sitting in my hospital room holding my baby and then handing that baby to her. 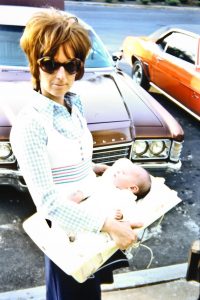 Daniela and her mother

Two months after her procedure she started experiencing pain in her right side and an unnaturally swollen abdomen. When she was admitted to the hospital for her worsening condition, she was placed in a room in the maternity ward because the main hospital was full. The rooms in this new wing were spacious and included an extra sleeping alcove intended for husbands to keep wives company after birth.

I spent eight nights sleeping in that alcove beside my mom before we took her home in care of Hospice. Each time I entered the lobby of the maternity ward on my way back to her room, I’d see happy people clustered with stuffed animals and balloons, waiting with giddy anticipation to meet the newest members of their families.

The irony was not lost on me.

After losing my mom I started distancing myself from my own visions of being a mother. For me, motherhood was entwined with daughterhood; the two went hand in hand, and without my mom in my life, it became easier to accept that I would never be a mother myself.

Coming to terms with my grief, for my mother and my motherhood, was a lesson in humility. The work of letting go of grief and letting go of expectations became a process of letting go of my strong drive to control outcomes. Sheer force of will, something I’d applied successfully to other parts of my life, proved useless in the face of life and death. I had to learn that the only outcome I could ever control is my own reaction to what’s happening now.

It only took me three years, plus half a lifetime, to get there.

In the meantime, our “potential babies” remained on ice somewhere in New York City.

We were told by more than one doctor that our two remaining embryos were of “mediocre quality” and that our chance of a successful pregnancy, even with a healthy surrogate, was less than 20%.

Despite these stats, we felt we owed it to ourselves, and our potential babies, to at least finish the story. So we threw a Hail Mary pass and took a trip to Kyiv, Ukraine — with our embryos as our carry-on luggage — to meet our surrogate. After so many years of similar odds and no successes, we looked at this journey as an adventure, with no hope but with open hearts.

Despite these stats, we felt we owed it to ourselves, and our potential babies, to at least finish the story. So we threw a Hail Mary pass and took a trip to Kyiv, Ukraine — with our embryos as our carry-on luggage — to meet our surrogate.

“Today we are 32-weeks pregnant with identical twins via our surrogate in Kyiv.”

This sentence runs through my head countless times each day, and each time I am floored. After so many years of disassembling my expectations of motherhood it is now time to reassemble.

Each time I’m hit by a wave of fear, of the enormity of this life change, and my instinct to control starts to kick back into gear, I remind myself that the only thing I know for sure is that I’ve never been in control of any part of this story.

When the time comes, all I can do is show up and let someone else hand me both of my babies.

Are you preparing to conceive, pregnant, or new to motherhood?

Expectful is guided meditation for hopeful, expectant and new moms. Each one of our guided programs is based on research that illustrates the benefits for your fertility, pregnancy, and motherhood journey.

Practice online, when you want, wherever you are, in just 10 minutes a day to improve your fertility and give your baby the best start in life.

Go to Expectful.com and sign up for your free trial.

The Meditation and Sleep App for Fertility, Pregnancy and Parenthood

We understand that growing your family while having a healthy and happy pregnancy and baby is probably a top priority for you right now.

We created Expectful to help you harness the power of your mind to have a healthy, happy pregnancy and baby.

All of our meditation content is based on interviews with many soon-to-be and new parents just like you, and is created with the help of licensed psychologists, hypnotherapists, and meditation experts. You can practice in just 5 minutes a day.